Celebrating Our Past, Preparing Our Future: UFCW Local 832 Podcast

UFCW represents workers in the retail, meat packing, and garment industries. The UFCW Local 832 is a local union of the United Food and Commercial Workers union. It represents workers at a variety of workplaces in Winnipeg and elsewhere in Manitoba, Canada. It has a heavy representation in the service and retail sector. Local 832 can be considered a ‘mega-local’, or a union local consisting of a large number of workers and workplaces. This is due to a long series of mergers between UFCW locals in Manitoba. It is this diversity that gives local 832 its rich history that stretches back nearly 100 years with the meat packing, brewery and retail clerks union locals in Winnipeg.

Scott Price, OHC researcher and University of Winnipeg history graduate was selected as the lead researcher and interviewer for the project. Beginning in 2012, Price began interviewing retired and current members of the union while gathering photographs and other archival material to create a permanent record of the union’s presence in Manitoba. To date the project has produced over sixty interviews, making it one of the largest labour organization oral history collections in North America.

The Oral History Centre, CKUW 95.9 FM and the Finding Your Voice literary project have partnered to create the Find Your Voice Podcast.

The Finding Your Voice literary project published “The Past is Another Country,” an anthology of stories by New Canadians. The collection represents the experiences of writers from China, Ethiopia, India, Kenya, Korea, Macedonia, Nigeria, the Philippines, Poland, Taiwan, and Uzbekistan. The aim of the Find Your Voice Podcast was to produce a series of programs that would feature the stories, experiences, issues and challenges of New Canadians. Four stories from the series are featured on the OHC site.

Written and Narrated by Scott Price

A special thanks to UFCW Local 832 and the partcipants of project.

Today women have an important presence in UFCW local 832. From rank and file members, to shop stewards to union representatives to the executive board. We may take this for granted today but this was not always the case. There were several key feminist activists in local 832’s history that pushed for the local and the wider labour movement to both create space for women in the labour movement and change their structure. This podcasts explores the key work of feminist activists in UFCW local 832 and how they challenged the local and wider labour movement into being a more inclusive space for women. 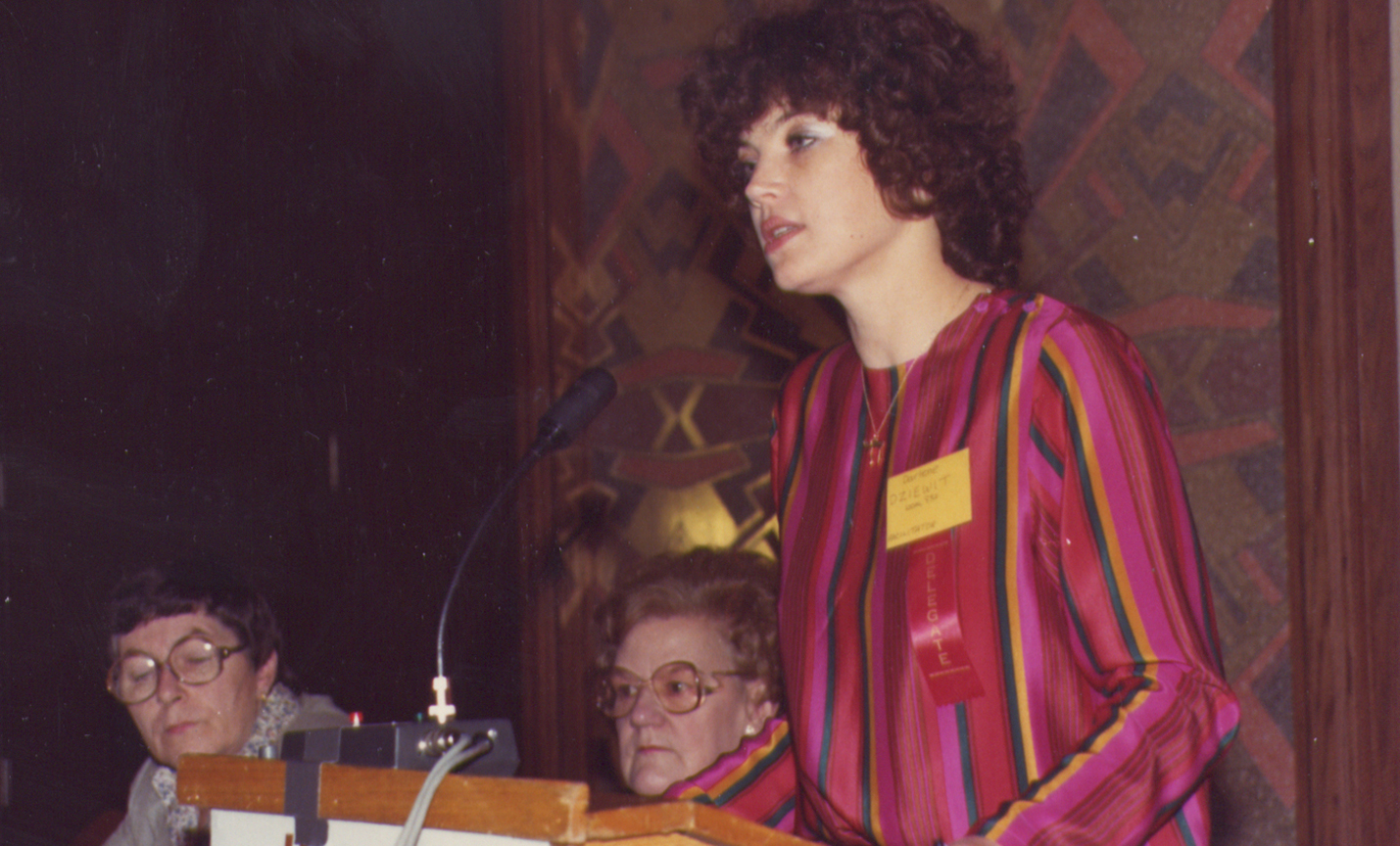 Episode 1 - The Growth of Feminism in Local 832

The demographics of Union membership has changed drastically over the last thirty years. With this change unions had to adapt. UFCW local 832 created training centers for its members that would supply not only classes in more traditional union activities (bargaining, health and safety) and English as an additional language as well as other skills training. The story of the creation of local 832’s training center is not only about a change in demographics but also the change in the Canadian economy over the last twenty years. 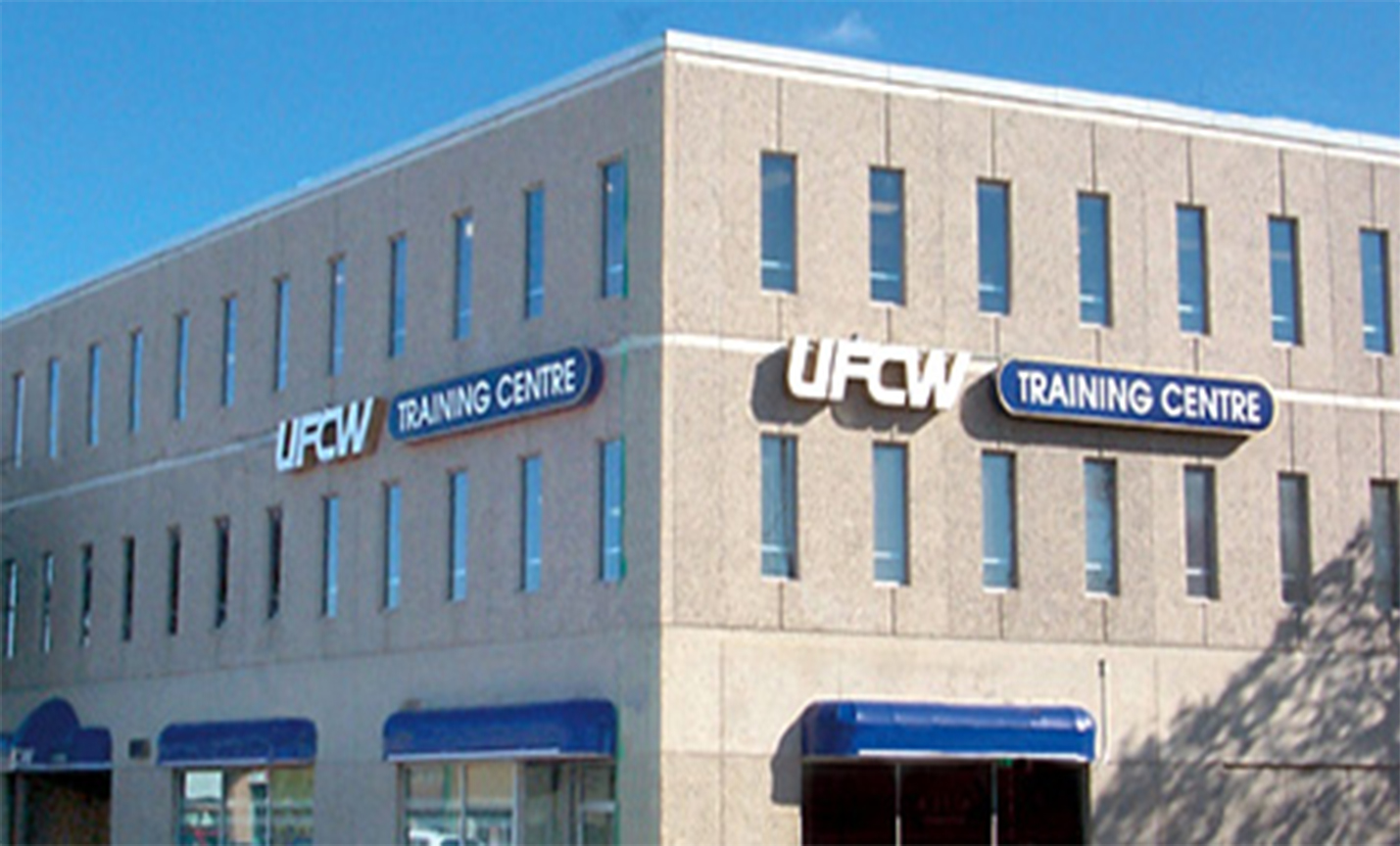 Starting in the late 1960’s there was a growing movement for women’s reproductive choice. Before 1969 abortion was illegal, after 1969 women still needed a letter from psychiatrist to get a legal abortion and see a therapeutic abortion committee. The issue of abortion was prominent throughout the 70s and 80s, driving a movement that brought feminists together both within and outside of the labour movement.  Following raids on Henry Morgentaler’s Winnipeg clinic in 1983, members of UFCW local 832 organized and took a stand at the 1983 Manitoba Federation of Labour convention to pressure the labour movment into recognizing the reproductive rights of women.

This podcast features two key pro-choice labour activists, Darlene Dzewit and Susan Hart-Kulbaba, explaining the lead up to and the 1983 MFL convention where the issue of abortion was debated on the scene of the convention floor. 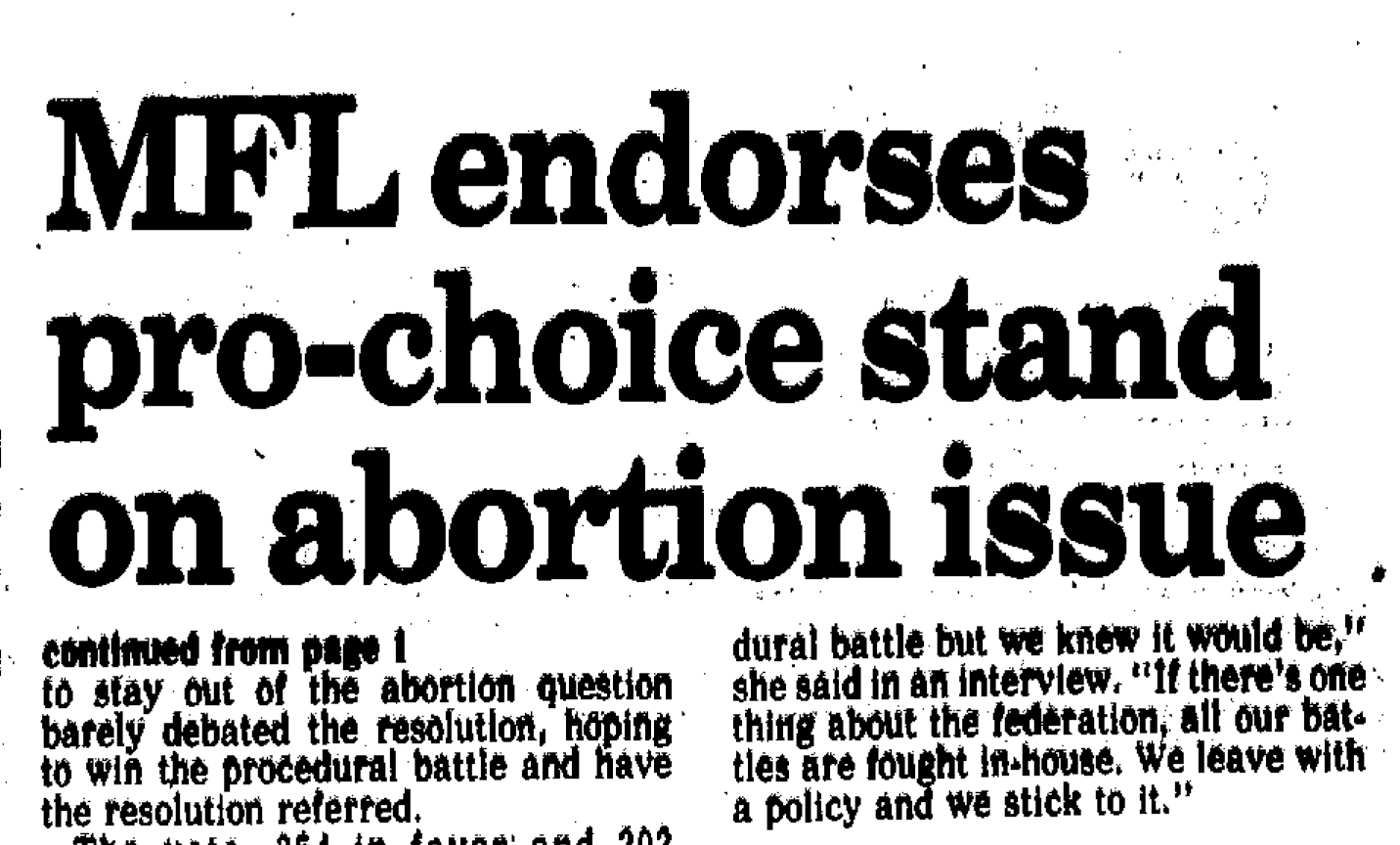 In the history of UFCW local 832 there have been many strikes and picket lines. While all are important for union members and the wider labour movement the Westfair strike of 1987 is a special one. While today UFCW local 832’s membership is taken by a sizable portion of members from Superstore the strike of 1987 was a challenge to that. The key issues in the strike were a two tier wage system part time and full time employees and how the stores were managed but developed into whether or not UFCW would be representing workers at Superstores.  The superstore strike of 1987 highlights several key historical points.

Firstly the strike comes at a time in the late 1980s when increasing workers and unions were seeing more attacks on wages and benefits from both private employers and the state. The post war compromise between labour and capital which was brought into place after World War two was official dead. Employers were now becoming even more sophisticated in their attempts to squash unions and worker demands. Secondly the strike also highlights the change from grocery stores of the past with a largely full time staff to the large box stores today which are largely staff by part time workers. Thirdly, as with the history of strikes in UFCW local 832’s history a group of activists rose out of the strike to became key parts in the union in the future.

This podcast explores the various stories from the picket lines during the Superstore strike of 1987 and the importance of the strike in the union’s history. 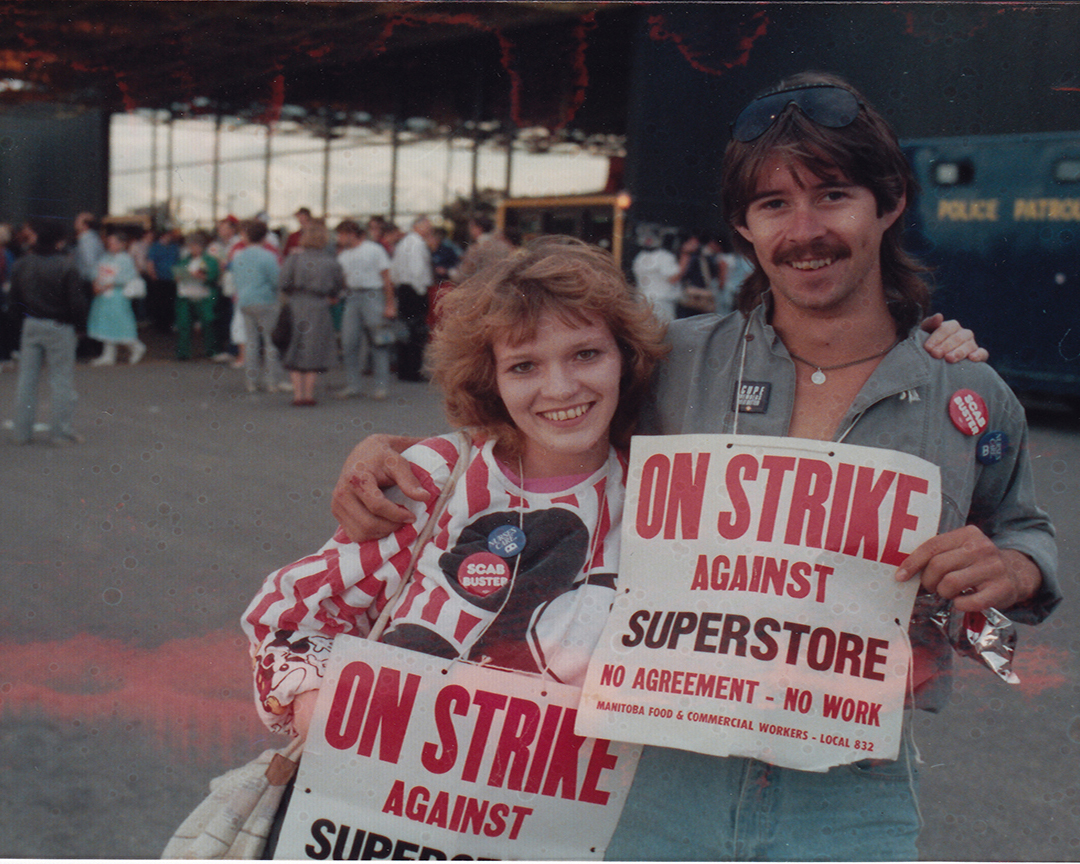 Episode 4 - Fighting for Survival: the Westfair Strike of 1987

UFCW local 832 rich history is due the many mergers that made the union what it is today. Mergers with unions in the garment and brewery industry are just some of the many facets to local 832. The merger between the Retail Clerks union and the Amalgamated Butcher Workmen of North America that created United Food and Commercial workers in 1979 is one of the key mergers in local 832 history. This merger not only merged two unions but two union cultures.

This podcast explores the politics around the merger in 1979 of the Retail Clerks Union and the Amalgamated Meat Cutters and Butcher Workmen of North America. 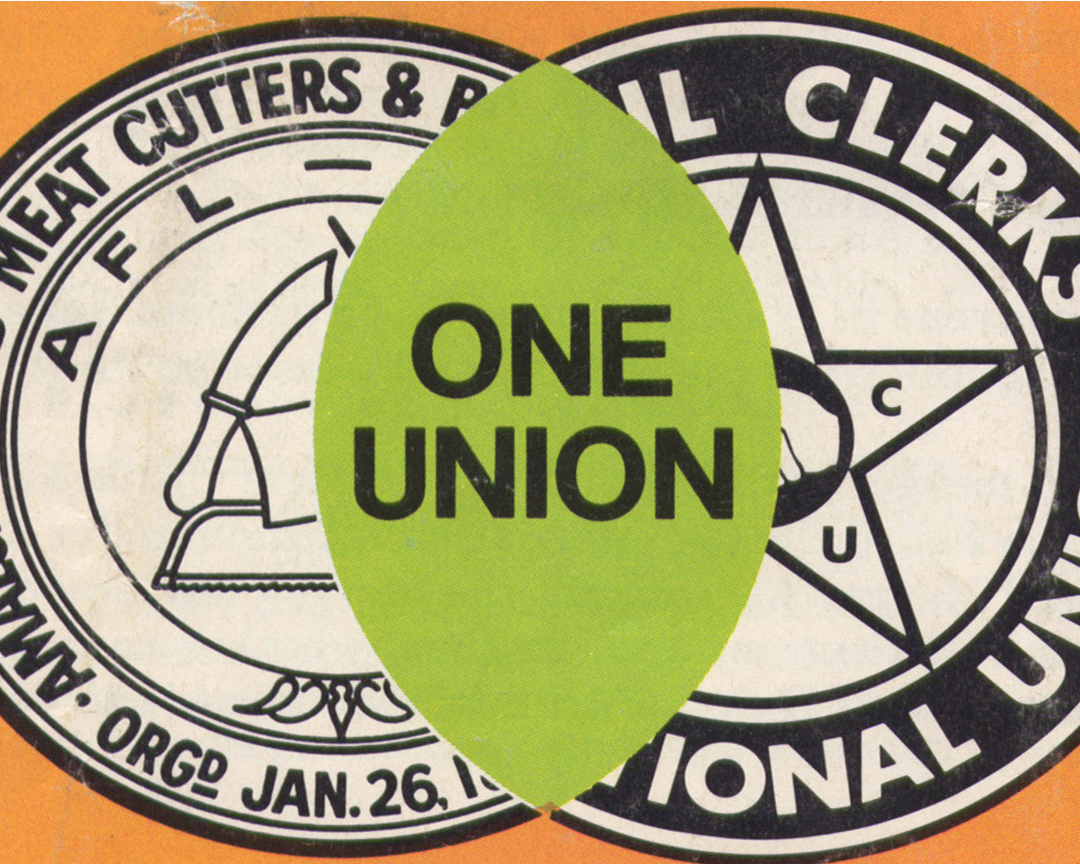 1978 was a watershed year for UFCW local 832 as there were almost continuous strikes from May 15th 1978 to January 1979, with the exception of one week at the end of November 1978. 1978 saw massive labor disputes and strikes across Canada due to the fight over price and wage control. Negotiations at the Anti-Inflation board had stalled which ended in the termination of the board. In particular workers and unions were told to exercise self-restraint on wages and benefits while inflation increased the cost of living. Thousands of workers went on strike. UFCW local 832 was front and center during these disputes in Winnipeg. The Safeway strike started in June of 1978 with nearly 2,000 Safeway employees went out on strike. Adding to these numbers were the workers at Lucerne, Empress Foods, liquor stores and the construction industry going out on strike in 1978. All of these factors lead to 1978 being the year of the strike. What follows are some of the stories and memories of former local 832 members and staff about the Safeway strike of 1978.

This podcast explores various narratives on the Safeway strike of 1978 and the memoires from the picket lines.