On March 24, 1944, Nazi occupation forces in Rome killed 335 unarmed civilians, some of whom were Jews, in retaliation for a partisan attack in which 32 Nazis were killed the day before.

It is a legendary event in Italian collective memory.

Then, in the late 1990s, one of the perpetrators of that massacre was identified in Argentina and extradited to Italy to stand trial.

At about that same time in Italy, there was a strong revisionist right wing attack to debunk the anti-Fascist foundations of the Italian state, says Dr. Alessandro Portelli, Professor Emeritus, University of Rome La Sapienza and recent lecturer at Princeton University.

Professor Portelli was a guest lecturer at the Oral History Centre, University of Winnipeg for 10 days recently. He also spoke at a public meeting – Oral History: Navigating Storytelling in the Digital Age – in the Carol Shields Auditorium, Millennium Library, and to several university and high school classes.

Portelli is the author of The Order Has Been Carried Out – History, Memory, and Meaning of a Nazi Massacre in Rome (Palgrave Macmillan)–the winner of the Oral History Association Book Award, 2005.

Portelli is the world’s leading practitioner of oral history in the West over the past 25 years, noted Professor Nolan Reilly, one of the founders, along with Professor Alexander Freund, of the OHC.

“He’s referenced by almost everyone,” he added during a telephone interview.

“He’s extremely influential and very well known. We brought him in because we’re establishing the Oral History Centre as an international centre for research. And, he shares that commitment of excellence in his research but with deep community engagement.”

He describes Portelli, who is a 2015 Dan David Prize Laureate from Tel Aviv University, as brilliant and without pretence.

“He’s able to engage all ages and levels of education,” Riley remarked. 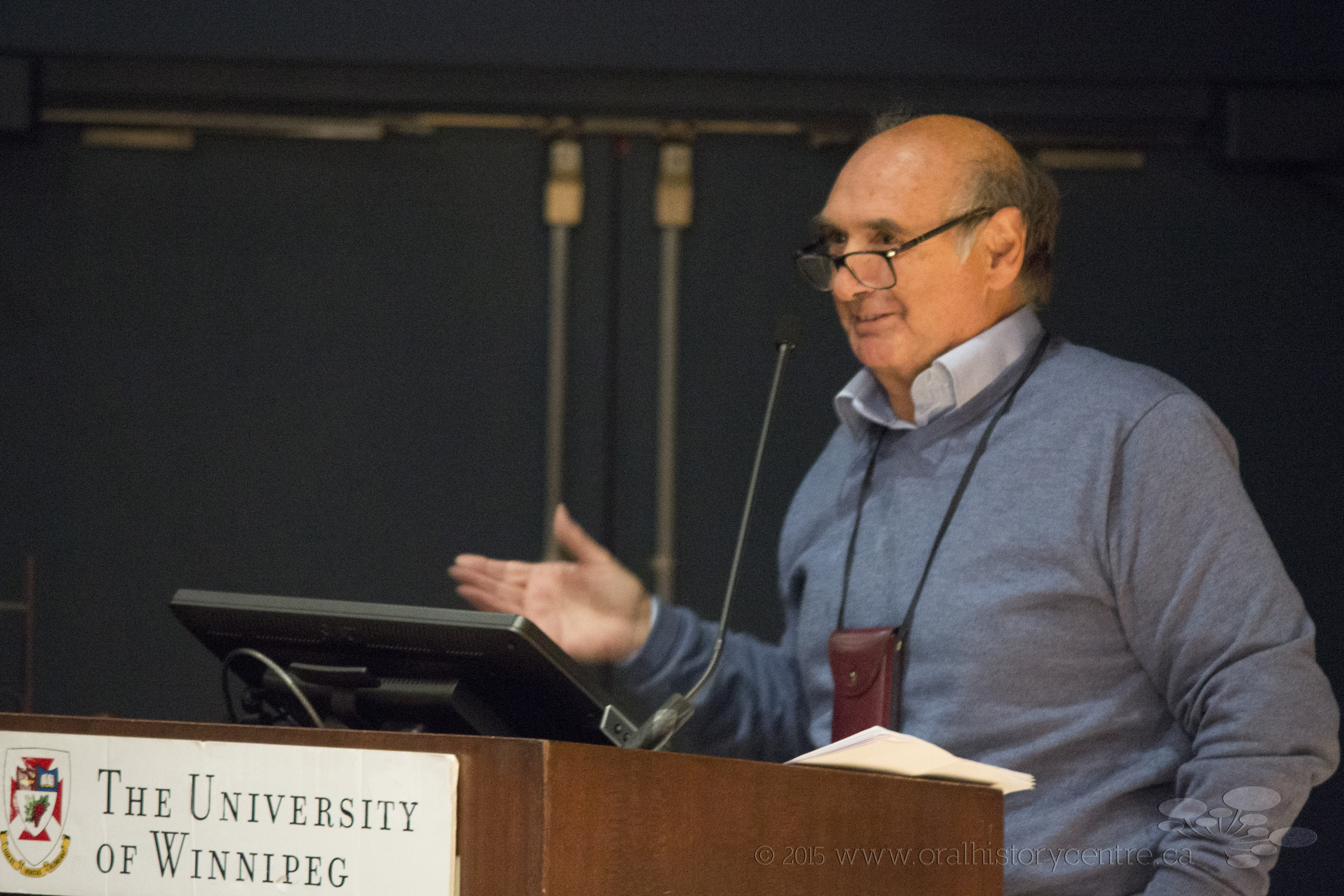 Alessandro Portelli speaks at the University of Winnipeg, 2015. Photo by: Kimberley Moore.

Significantly, the Dan David Prize website extols The Order Has Been Carried Out:

“Portelli examined numerous oral accounts to reconstruct the horrific events and their political uses in subsequent decades,” says the online information, which also mentions that the D D Prize aims to foster universal values of excellence, creativity, justice, democracy and progress and to promote the scientific, technological and humanistic achievements that advance and improve our world.”

“What made the book so striking was not just the myth-shattering story, but the fact that many of the witnesses got the facts wrong; memories and facts were so clearly at odds,” continues the website write-up. “Yet, instead of discarding their accounts, Portelli made the witnesses into what he called the ‘narrators’ – re-shapers of the past whose ‘creative’ recollection enriches our understanding of the way the past continues to live long after events have taken place. The book became one of the most influential models of oral history for historians everywhere.”

“He’s extremely influential and very well known … he shares that commitment of excellence in his research but with deep community engagement.”

During an informal interview with The Jewish Post & News in the lobby of his hotel, Dr. Portelli said he was intrigued that the survivors of the 1944 massacre would still get so emotional about it during the trial.

“My original reason for writing the book was the political meaning of the massacre and the emotional lives of the survivors,” he explained.

“How did they cope for 50 years with that open wound? So, I began interviewing survivors and partisans, and anybody to find out what they knew. Part of the political meaning is that there is a false meaning around this event.”

Portelli, the author of numerous other books, said the partisans’ attack on the Nazis was a brilliant military success.

But, he explained, there was a false narrative surrounding this event afterward – condemning the freedom fighters for the massacre.

It was something believed not only among the right wing, but the general public too, said Portelli, 73, who mentioned that the book’s title was taken from the press release issued by the Nazi Command.

“The population blamed the partisans for failing to give themselves up to the Nazis (who actually never even bothered to seek them out), which supposedly would have avoided the retaliation,” he continued, noting that the subsequent massacre of civilians was the biggest retaliation and the only one by the Nazis in a major city in Western Europe during the war.

“On the one hand it was a sense that this story had been used to attack the partisans and freedom movement and the anti-Fascist ethics of Italy.

“The victims, themselves, were a cross section of a modern metropolis. By reconstructing their stories, you get a glimpse of the city itself. Many of these people came from different parts of the country. So, it reverberates throughout Italy.”

The massacre made the population feel that the Germans couldn’t be touched, he pointed out.

“So, the massacre served its purpose,” Portelli said.

“The book was a way of coming into context with the more recent history of Rome.”