My father often took me to the factory with him when I was a small boy.  Dad was the foreman of the finishing room in a medium sized textile factory in Galt, Ontario.  The company made towels of all sizes and styles to be sold across North America.  The finishing room was a marvelous place for me. I loved going there. Towels of all colours that had just come up from the dyeing room were stacked high on tables to be sized, hemmed, and labeled before being wrapped in parcels of a dozen each and sent off to the stockroom for shipping.  In the peak production years of the early 1960s, the finishing room employed 120 workers.  Two men did the “heavy work,” mostly lifting and moving large stacks of towels about the room, while the cutting, hemming, labeling, and parceling was women’s work. This work – especially the hemming and labeling of the towels – required a good deal of skill with a sewing machine and these were the most prized jobs in the department.  These machine operators were paid on a piecework scale and were the highest paid workers.

My father was responsible for hiring all the employees in the finishing room.  In the nineteen sixties textile work did not pay well – even for those who held skilled positions.  It is not surprising, then, that most of the women in the finishing room were first and second-generation immigrants.  Italian and Portuguese women constituted most of the work force. They were joined by an increasing number of women from Newfoundland.  There was also one other, smaller group of women busy at work on those days when I wandered through the factory: Mennonites.  I had no idea what that meant at the time. My only encounter with Mennonites was on visits with my parents to the nearby farmers markets of Kitchener and St. Jacobs. I do remember these women, though, as perhaps the most exotic looking workers on the shop floor.  They were a group of perhaps 20 women working at the large tables over near the big windows facing onto Water Street. Sometimes they cut towels and, at other times, hemmed and labeled them.  It was not the fact that they spoke in German – a language I did not understand – that made them seem different. After all, English was an additional language for just about everyone working on the shop floor. It was partly their hair – tied up in the bun at the back of their head and covered by a hair net of some description – that made them different from most of the other women. They were taller and stronger looking than the others. But also, they wore white, blousy tops and long dark skirts. I noticed too these workers usually took their breaks at their work tables, while the other women, often with me in tow, went off to the canteen. 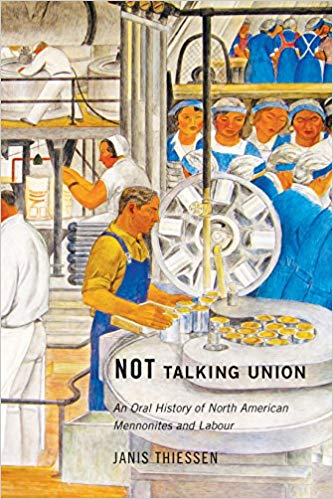 When I was older and studying labour, immigration and ethnic history, I talked with my dad about work and life in the finishing room.  After I had moved to Winnipeg, where I discovered a much bigger world of Mennonites, my dad told me that the Mennonite women were the most determined workers he encountered in his many years in the factory.  Mennonites were hard workers, he said. They kept to themselves and rarely complained about their lives in the factory. Mennonite women were particularly drawn to piecework, he told me, where they could make the most money. They definitely were “not talking union.” Oral historian Janis Thiessen in Not Talking Union set about researching why not.

Not Talking Union is an examination of the relationship between Mennonites and the labour movement. But the monograph’s scope is larger than this suggests. Thiessen is interested in how working people experience their “lived religion” in everyday life. The book is about social class, ethnicity, gender, and religion intersecting in everyday life to shape Mennonite responses to work and, especially, to the labour movement in the post Second World War era. Thiessen, herself a Mennonite, wondered if such a project was even viable. Mennonite workers were like workers everywhere. They left few traces of their lives in archives and museums for historians to study. Fortunately for Thiessen, she had discovered oral history. She had used it as a secondary methodology in an earlier study of the Mennonite business elite, in which she examined its understanding of religious practice and managing a business. In Not Talking Union, though, oral history is central to the production of the story. In the time between her first book and Not Talking Union, Thiessen’s methodology advanced considerably.

Thiessen applied well known German oral historian Alexander von Plato’s four stage approach to interviewing to her study.  In the first step, interviewees are invited to recount their life history with few interruptions from the interviewer.  This is followed with a second stage in which the interviewer asks questions of clarification about the preceding life history.  Next, the interviewer may put specific questions to the interviewee related to the research project.  The final step, which von Plato calls the “conflict stage,” is optional.  Here the interviewer might probe apparent contradictions between other historical research and the memories of the interviewee.  This is not intended to be confrontational but may become so depending on the sensitivity of the subject matter, as Thiessen discovered.

Thiessen found herself asking her interviewees some deeply personal questions in her bid to understand the relationship between religion and daily living around work.  She wondered about how the interviewees experienced spirituality in their daily lives, if at all.  Thiessen wanted to know what it meant in the workplace to be a Mennonite or, in other words one presumes, how religious belief affected their relationships with other workers and managers.  I don’t know of another study in Canadian labour history or religious studies that probes this question so directly and thoroughly.  This is especially true if one considers as part of this study Thiessen’s findings in her first book, Manufacturing Mennonites: Work and Religion in Post-War Manitoba.

Thiessen found herself asking her interviewees some deeply personal questions in her bid to understand the relationship between religion and daily living around work.

One hundred and fifteen interviews were conducted in six locations across Canada and the United States.  Most of the interviewees were ethnic Mennonites and most were initially identified through word of mouth.  Interviews were conducted in homes, work places, restaurants, and coffee shops.  These sites were chosen for the comfort and convenience of the interviewees.  All interviews were digitally recorded and deposited at the Mennonite Heritage Archives in Winnipeg.  Most of the interviews were of one to two hours duration.  Oral historians might be disappointed that a fuller explanation of the interview process is not provided in the book.  I am sure readers would be interested in hearing Thiessen’s observations on the merits of meeting interviewees in the various locations that were used. Thiessen does emphasize that her focus was on the quality, not the quantity, of interviews.  Yet 115 interviews are a substantial number completed in a relatively short period of time.  It would be interesting to know whether a pressing research schedule and the distant locales in which the interviews were conducted limited the possibility of longer or multi-session interviews. Or, perhaps, Mennonites are culturally reticent reluctant interviewees. Thiessen’s interactions with the interviewees is an enticingly undeveloped theme in the book. Glimpses are given into the personal impact of the interviewing sessions on the researcher and narrators, glimpses that will leave oral historians wanting more. On the other hand, there probably just wasn’t room in the book to delve this deeply into the methodology. I hope at some point Thiessen will write an in-depth article describing and reflecting upon her interviewing experience.

In Not Talking Union, the focus is the relationship between being Mennonite and its adherents’ attitudes to their experience of work. Thiessen’s investigation of this relationship is organized around several case studies.  For many readers the most interesting and most familiar episode revolves around migrant workers and their organization, the United Farm Workers (UFW), in California in the 1970s.  Mennonite producers in the state hired significant numbers of Hispanic workers.  Most producers opposed unionization.  However, Mennonites outside California were more sympathetic to the plight of the mostly migrant workers from Mexico and Central America.  As the conflict intensified in California, Mennonites outside the region gradually began to criticize Mennonite producers, as well as the larger corporations involved in the dispute.  In a probing article in a Mennonite newspaper, a member of a church committee investigating the conflict in California asserted, in Thiessen’s words, that “Mennonites needed to investigate how wages and benefits for workers and management in various occupations were determined, and why the wage differential between management and labor was so great. “(85) Such talk alarmed California’s Mennonite producers who felt justified in their opposition to the UFW.  Church finances brought the issue to a head.  Western producers and their supporters in other regions, on whose financial assistance many Mennonite churches, institutions, schools, and colleges depended, threatened to withhold that support.  According to Thiessen, Mennonite leaders fearing for the viability of these institutions chose to effectively silence criticism of the California producers.

The UFW migrant farm workers struggles with California producers still resonates among those who were involved in the conflict.  Here the importance of oral history interviewing is in full evidence.  On the one hand, some of Thiesen’s most challenging interviews were with the California producers and processors, some of whom declined to be interviewed, and others who did so but only reluctantly.  Not surprisingly, those who did agree to an interview understandably sought to justify their actions.  This again created problems for Thiessen about the degree to which she wished to challenge those stories.  One wishes that Thiessen had provided a fuller examination of the ethical, analytical and methodological concerns raised by these interviews. On the other hand, the struggles between the workers and producers in California created another entirely different research problem for Thiessen.  The farm workers were Hispanic, Catholic and often migrants.  She was none of these.  Thiessen went to considerable lengths to identify workers who had worked for the Mennonite producers who were willing to be interviewed for the project. But she was unable to identify interviewees.  Much of this frustrating process is described in the book.  Oral historians will identify with Thiessen’s disappointment upon her realization that she must proceed without these memories and reflections.

Not Talking Union reminds us of the value of oral history in capturing for present and future generations individuals’ remembrances and understanding of their lived experiences.  In her final analysis, Thiessen observes that the collective result of her many hours of interviewing was different from what she had expected when setting out on this research journey. She says in her introduction that “I had set out to find stories of collective action: what I heard were stories of individual negotiation.” (8)